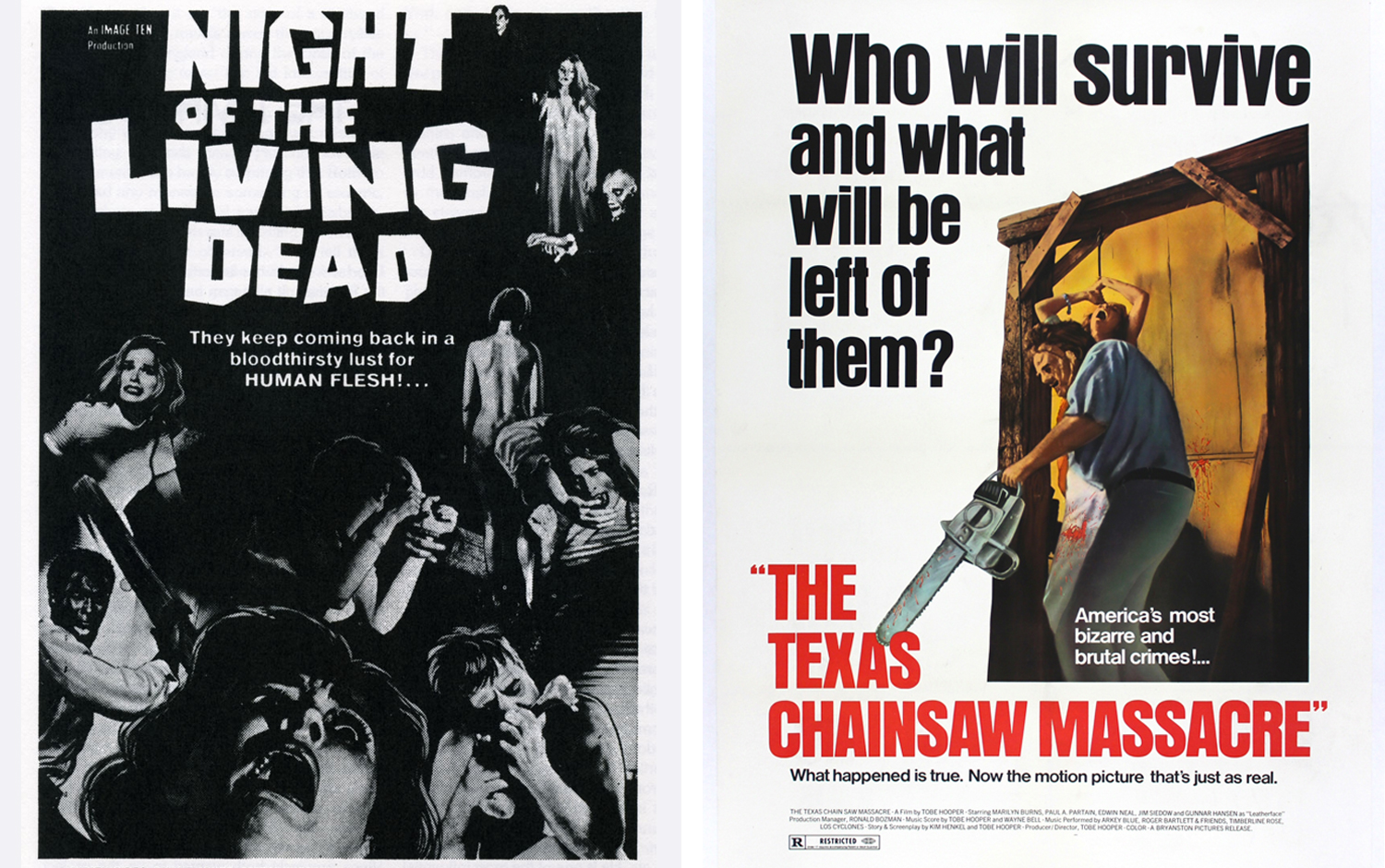 History has puzzling patterns. Michelangelo Antonioni and Ingmar Bergman (two film directors who both explored the post-World War II malaise of European society) died on the same day in 2007. Ten years later another juxtaposition was just as revealing about American society. George Romero (who directed the most politically charged horror film of the 1960s) and Tobe Hooper (who directed the most controversial horror film of the 1970s) died during the summer of 2017 roughly a month apart. Romero’s death in July and Hooper’s death in August could not have happened at a more telling time. The U.S. has been confronting the most intense racial violence since the era of the Civil Rights Movement and a raging xenophobia provoked by economic insecurity.

Romero’s Night of the Living Dead and Hooper’s Texas Chainsaw Massacre were released on the same date (October 1) six years apart. Both films bookended one of the most tumultuous and turbulent times in American history.

President Lyndon Johnson abruptly announced at the end of March that he would not be running for reelection after his escalation of the conflict in Vietnam had alienated anti-war citizens. Martin Luther King Jr. was assassinated only four days later on April 4. Robert Kennedy was assassinated two months later on June 6. The summer of 1968 climaxed in August with protesters being clubbed outside the Democratic Convention in Chicago. America circa 1968 seemed to be splitting apart.

America circa 2016-2018 (a divisive election and Trump’s first years as president) has felt equally fractious. Hate crimes metastasized throughout June and July 2017. A noose placed in the National Museum of African American History and Culture. A couple assaulted and threatened with a lynching. A family’s home firebombed. A man brutally beaten in a park. A teenage girl and her brother burned in an acid attack. The summer of 2017 climaxed in August with the protest against the removal of Confederate statues and the counter-protest against neo-Nazis and white supremacists resulting in death and destruction in Charlottesville. There is an aura of mistrust creeping across the nation infecting it like a plague.

George Romero sensed a sickness in society. News reports in the 1960s were constantly barraging the viewer with images of predominantly white policemen assaulting black men. Romero and his crew shot his debut feature in a rural area near Pittsburgh in 30 days. Romero recollected how saddening the completion of the film was to him in the 2000 documentary The American Nightmare. The night they drove to New York to search for a company to distribute the film was the night Martin Luther King Jr. was assassinated. The tragedy shook him deeply and echoed the last scene in Night of the Living Dead. Romero chose to cast an African American actor Duane Jones as the lead character in his debut feature. Duane Jones’ character Ben is the only black man holed up in a farmhouse with a group of white people desperately struggling to escape the onslaught of zombies. The zombies are the dead who have been resurrected by radiation. They feed on human flesh and can only be killed by being shot in the brain. Romero ingeniously and simultaneously combined the atrocities of Vietnam and the fears of nuclear degradation in his creation of zombies.

But the worst horror? The worst horror was all-American. The worst horror was domestic—a disturbing scene where a little girl cannibalizes her father and stabs her mother to death with a garden trowel. The final scene was the most haunting. White police officers systematically shoot zombies and shoot the main character (our only hero) Ben in the head. The leader of the posse brutally remarks “That’s another one for the fire.” A series of grainy black-and-white stills shows Ben’s corpse being desecrated with hooks and carried to a pile of bodies which is then set ablaze.

The connection between Ben’s demise and the racial violence besetting the Civil Rights Movement was all too clear. Night of the Living Dead (a low budget horror film) had dissected American society in the 1960s more truthfully and unapologetically than any mainstream Hollywood movie.

Tobe Hooper’s directorial debut in 1974 was also a spit in the face to sanitized Hollywood mores. Hooper had discerned a dread and a menace in the collective unconscious of American citizens in 1973. American involvement in Vietnam had ended. Yet the returning soldiers were scarred and traumatized. The war had bankrupted the American economy so the nation was suffering the most severe economic recession since the 1930s. The blue collar jobs that had been so reliable for the G.I. generation were now drying up as factories closed across the states. Poverty was leading to skyrocketing statistics of violence. The oil embargo had gripped the country in an energy crisis. What would people do if everyone ran out of gas?

Hooper and his crew shot Texas Chainsaw Massacre in the scorching hot summer of 1973. July and August temperatures were unrelenting. The actors endured sweaty hell with the lack of budget. Marilyn Burns was actually beaten with a broom and had her finger sliced. The actors’ performances were deranged and hysterical because of the awful conditions. Jim Siedow and Edwin Neal seemed truly psychotic. Gunnar Hansen’s Leatherface was influenced by the serial killer Ed Gein. Cinematographer Daniel Pearl captured an atmospheric and hallucinatory intensity in his camerawork of the Texas landscapes. Production designer Robert Burns created a claustrophobic house with animal bones and rotting headcheese.

Texas Chainsaw Massacre is the grimiest and grittiest horror movie ever made. It rightfully deserves its place in the Museum of Modern Art.

Hooper dissected American capitalism in such a raw and uncompromising way in Texas Chainsaw Massacre. The shadowy underbelly in the dream of the frontier (proudly worshiped by settlers and presidents since Manifest Destiny) was now graphically exposed. Hooper’s film was quite prescient. The current debate about the meat industry (its drain on economic resources and its effect on the diet and environment plus its ethical implications) along with the debate about the U.S. weaning itself off of oil is explored in monstrous proportions in Texas Chainsaw Massacre.

Apocalyptic news on the radio drones on in the opening credits of the film as infrared shots of solar flares create hellish abstract designs.

“Oil storage units continue to burn out of control at the huge Texaco refinery near the Texas-Louisiana border. Three storage units exploded into flames during the night killing at least three workers and injuring a dozen more. Firefighting units in three Texas cities continue to battle the holocaust in an effort to confine forty foot flames. Smoke from this fire is visible by residents some sixty miles to the south. Health officials in San Francisco reluctantly admit they may have a cholera epidemic on their hands. Some forty cases of the highly infectious disease have been confirmed. Houston police are puzzled by an outbreak of violence apparently touched off by a suicide. A young man, reportedly angered by a local television blackout of a sports event, jumped from the tenth story window of his apartment. A second man allegedly threatened to leap to his death from the same window but was restrained by police. Witnesses to the incident reportedly heard the man jump…A sixteen story building under construction in downtown Atlanta collapsed today killing at least twenty-nine persons. The engineering firm responsible for the structural design of the building could offer no explanation for the collapse. Spokesmen for the construction firm say there’s no logical reason for the collapse and suspect sabotage. Police in Gary, Indiana have been unable to identify the bodies of a young man and woman discovered by children in a gymnasium…their bodies were covered with stab wounds and their features carved away. The man’s dimples had been removed and police first identified the two victims as women. Continuing squabbles among corrupt governments over oil rich regions of the upper Amazon today erupted into violence. Forces of at least three South American governments are reportedly involved…Police in Dallas have arrested a young couple today after complaints by neighbors led them to discover the eighteen month old daughter of the couple chained in the attic of a dilapidated house…”

This bizarre broadcast catalogs an increasingly insane list of traumas punctuated at the beginning and the end by economic turmoil and violence caused by both domestic and foreign oil. This foreshadows the story that unfolds. The cook at the barbecue shack tells the young people that he does not have any gas. Kirk and Pam walk to their doom because of the lure of fuel when Kirk hears a generator sputtering in the distance. The warning signs? An antique watch dangling from a tree speared through with a railroad spike. Cars and trucks too numerous for one person or family hidden underneath clogged netting.

The Sawyer family’s slaughterhouse business being shuttered is the sinister and unsettling central locus of the story. There is a tripartite structure in the family which mirrors the capitalist classes of American society. The hitchhiker (the working class) complains that he and his brother Leatherface “do all the work.” The cook (the middle class) comically complains after beating Sally with a broom that “the cost of electricity is enough to drive a man out of business.” The hitchhiker offers his own conservative economic observation to the liberal hippies who he helps kill: “The old way—with the sledge. They died better that way. With the new way…people put out of jobs.” This sick capitalism is crystallized in the scene where the decrepit grandfather suckles blood out of screaming Sally’s finger like an overgrown baby.

The reactionary attitude of the hitchhiker in Texas Chainsaw Massacre can be recognized in the xenophobia which dominated the minds of voters during the 2016 election—causing them to both blame immigrants for the stagnation of the U.S. economy and decry NAFTA. What some commentators called blue collar anger or working class rage were among the factors that fed the grotesque victory of Donald Trump. Trump declared immigrants “animals” during his 2016 campaign and recently used the deplorable word “infest” to describe immigrants. He has cruelly divided children from their parents at the border. The U.S. has withdrawn from the UN Human Rights Council. Trump’s tax cuts decimating social programs and funding the corporate rich and wealthy (if captured in an image) are disturbingly similar to the grandfather draining the young generation.

George Romero’s Night of the Living Dead and Tobe Hooper’s Texas Chainsaw Massacre are much more than merely genre exercises or time capsules. The ominous disintegration of American society in both films is a reflection of the manipulation caused by American capitalism and a corruption of political power.

Will the new generation of filmmakers take the same radical risks as Romero and Hooper?

Mark Lager’s poetry has been published in Chiron Review and Opossum and his translations of the French poet Raoul Ponchon have been published in Circumference, Columbia Journal, and Denver Quarterly. He has also written a Southern Gothic screenplay To Death With You and an unpublished novella The Dust Shall Sing Like A Bird (set during 24 hours in Aleppo, Syria.)