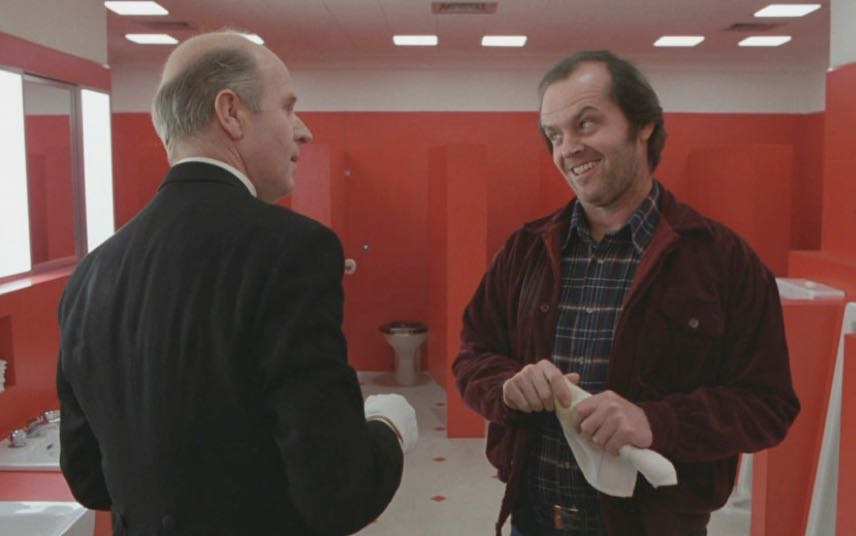 All Work and No Play: The Madness of Meaning in Stanley Kubrick’s The Shining

“On all sides, madness fascinates men. The fantastic images it generates are not fleeting appearances that quickly disappear from the surface of things. By a strange paradox, what is born from the strangest delirium was already hidden, like a secret, like an inaccessible truth, in the bowels of the earth.”  —Michel Foucault, Madness and Civilization

In his “Great Movie” review, Roger Ebert writes that The Shining is decidedly not a ghost story “because the ghosts may or may not be present in any sense at all except as visions experienced by Jack or Danny.” The movie, he declares, is “not about ghosts but about madness and the energies it sets loose in an isolated situation primed to magnify them.” The film’s lack of any reliable observer remains the crucial component creating its uniquely disturbing tone.1 And, of course, such unreliability invites various and sundry theories regarding the film’s meaning(s). Released in 2012, Rodney Ascher’s documentary Room 237 presents several of the leading voices (including Bill Blakemore and Geoffrey Cocks) outlining diverse interpretations and assorted perceived meanings within Kubrick’s film.2 Genocide, colonization, and slavery top the list—a three-word primer for American History 101, which might explain, in part, why historians are especially attracted to the film. Calumet baking powder, Native American tapestries and designs, German typewriters, the numbers 42, 13, 237, the references to burial grounds, an imperialist poem by Rudyard Kipling, July 4th, the Apollo 11 mission, etc. If you want to build a thesis, the raw material awaits. The problem, however, is that it’s just that: raw material. The documentary, in leading us everywhere and nowhere, fascinates, but ultimately presents “clues” in the fashion of one spotting a rare Minotaur in the wild. It’s a hodgepodge of morsels and snippets. Tantalizing, yes, but definitively convincing they are not.3 It’s true that Jack’s typewriter, an “Adler” (which means “Eagle” in German and thus, according to Geoffrey Cocks, symbolizes State Power—the German as well as the American variety), changes color without any hint of explanation.4 It’s true that we see Danny (Danny Lloyd) wearing a number 42 jersey and that he and his mother, Wendy (Shelley Duvall), are watching Summer of ’42 on a TV set that apparently lacks a power cord5 It’s also true that the Overlook Hotel’s oven is broken. Knowing that Kubrick was raised in a Jewish household in the Bronx and that he was, above all, a meticulous filmmaker we may assume these details are neither insignificant nor unintentional. But do they add up? It’s true that 2 x 3 x 7 = 42. And, yes, the distance from the Earth to the Moon remains roughly 237,000 miles. Accident? Chance? We don’t know.

Michel Foucault’s Madness and Civilization (1961) traces the concept of “madness” from the leper colony, which defined disease by identifying visibly deformed human aspects to, over time, a more subtle and loosely specified—and thus more politically motivated—set of internal criteria, which would eventually be diagnosed via conversation (i.e. psychiatry). The leper colony became the “Ship of Fools,” which eventually became the hospital asylum. What’s consistent here is the act of isolation and confinement. As Foucault writes, “madness is the false punishment of a false solution…” Human society has, in Foucault’s view, invented the “abnormal” in order to marginalize and ostracize it. It’s a way of understanding how important cultural concepts and meanings have been created through the tidy, Newtonian-like logic and configuration of an equal and opposing force: Normal/Abnormal; Healthy/Diseased; Reason/Unreason; Good/Evil; Moral/Immoral; Sane/Insane. Foucault outlines ways in which the concept of madness became politicized and thus moralized. Our “puritanical” work ethic—itself a topic ripe for deconstruction and re-evaluation—continues to retain a demanding and powerful echo of this historical and highly politicized headway as we, today, still assign a moral value to labor and equate idleness with insanity.

During the hallucination scene in which Lloyd the bartender (Joe Turkel) pours Jack (Jack Nicholson) a bourbon (breaking his purported five-month abstinence), Jack’s off-hand comment about the “white man’s burden” alludes to Rudyard Kipling’s 1899 poem infamously steeped in imperialist, pro-colonial, racist sentiment encouraging widespread implementation of European civilization to—in Kipling’s view—lazy, and ungrateful foreign peoples described as “wild,” “sullen,” and “half-devil and half-child.” This allusion to Kipling’s poem resonates in two memorable scenes, emphasizing major themes found throughout The Shining: the foundational violence of this country’s colonial past as well as—and not unrelated—the dynamic instability of meaning and the authority of context.

During the discussion in the hotel lavatory, Bertrand Grady (Philip Stone) explains to Jack the work of applying “correction” to his daughters (after one girl attempted to burn down the hotel) and his wife, once she tried to prevent Grady from performing his “duty.” Grady’s benign tone while describing the obligation to “correct” his family (not to mention his coded suggestion that Jack should behave likewise and murder his family as well) seems as ill-fitting and wrongheaded as Kipling’s prideful insistence that the enslavement of a foreign people is the noblest, if underappreciated work of, as the poem states, the “best ye breed.” It’s a scene teeming with layers of metaphorical and visual duality, emphasized, like all of Jack’s hallucination scenes, by reflective surfaces. Through his conversation with Grady we learn that the one constant found at the Overlook Hotel—and perhaps in human society and civilization at large—is “Jack Torrance.” But the film ultimately presents this knowledge in the form of a Mobius strip. Jack has always been the innkeeper; Jack has always murdered his family. To this end, Jack’s “employment”—his burden—will always be to act as the agent or signifier of a collapse, an entropic breakdown of organization as a rational system: un/reason, in/sane, etc.

The “burden” of labor as a fictitious barrier holding immorality/insanity at bay also underlines the famous scene in which Wendy surreptitiously discovers Jack’s novel in progress. “ALL WORK AND NO PLAY MAKES JACK A DULL BOY” playfully mimics “work” by ironically demonstrating an act of self-policing. Jack’s lament about labor (the “burden” of) is itself a form of routinized activity undertaken to avoid idleness/insanity. The “white man’s burden” here folds back onto itself in mindless repetition, albeit a repetition with a difference—not unlike the very act of endlessly mining the “trail of breadcrumbs” (a reference Wendy makes while Dick Halloran [Scatman Crothers] gives her a tour of the hotel’s kitchen) through the “enormous maze” of meaning Kubrick provides in the film. If Jack’s “work” denotes an act of madness in the ostensible meaning-less-ness of redundancy, then what about us, repeatedly viewing the film, finding (or imagining) fresh nuance, administering intention, signification, message?

Like meaning itself, madness is a social and cultural construct. It’s a dynamic concept changing over time and between societies as ideas about rationality change. Ultimately, Foucault and Kubrick strike the same chord in this regard. Consider the various sociological signposts Kubrick plants in the film: Native American, Nazi Germany, and the American Space Program. Each of these social, political, and scientific communities function(ed) through well-established, individual, codified systems of rationality. Each so dissimilar as to be incomparable, yet equally successful in maintaining group unity and identity by means of semantic denotations of reason and rationality. Taken together, these three communities indicate the expansive labor of rationality and Cold War scientism that can be seen as tracing an arc of human progression through the 20th century. With these historical and political allusions, Kubrick calls attention to the fact that social institutions, and the labor therein, persist in being underpinned by a host of shifting rather than stable systems. The madness, so to speak, like Jack, is “always” already there. This certain instability—a fact often, and conveniently, ignored—Kubrick accentuates in the “Closing Day” segment of the film.

Traveling to the Overlook Hotel, Jack and his family discuss, of all things, the Donner Party’s tragic 1846-1847 journey and snowbound entrapment in the Sierra Nevada. This discussion follows Danny’s chastisement for not eating his breakfast before the family left home for the Overlook Hotel. Jack’s response to Danny’s question about cannibalism and the Donner Party (“You mean they ate each other up?”) is that “They had to, in order to survive.” Jack employs a coldly rational justification for cannibalism, a well-known universal taboo. It’s a scene that pairs with one in which Jack is witnessed reading a January 1978 edition of Playgirl Magazine featuring an article entitled “Incest: Why Parents Sleep With Their Children.” Yet another universal taboo. And like cannibalism, a prohibition that in some circumstances or cultures might be—and has been—rationalized or accepted.

The conundrum here is nothing new. In Euripides’s Medea (a play about murdered children) written in 431 BCE, the center, as it were, does not hold. Fear and insecurity emerge from a belief that language itself has lost its authoritative power, its ability to represent truth, its ability to mean. We might argue that the deep fear of sophistry, or specious reasoning, that runs through Medea underscores The Shining as well. In both Medea and The Shining sacred bonds are made profane: Parent/Child, Husband/Wife, Oath/Deed. Absoluteness, determinacy, truth are shadowy, dim, unfixed. What’s to come of civilization if language is mere rhetoric? With this in mind, I would argue that Kubrick’s film stands as an Anti-Enlightenment monument, a kind of riddle for the ages, as it thwarts our own search for absolute meaning and demonstrates the inevitable violence required to invent it.

Jeremey Cagle is a Paris-based freelance writer and photographer. He holds a PhD in literature from the University of South Carolina and has published in various academic journals including The Edgar Allan Poe Review, The Cormac McCarthy Journal, The Southern Literary Journal, Mississippi Quarterly, and Critique: Studies in Contemporary Fiction.